Blockchain: What is blockchain technology?

I’m sure you’ve heard of the term previously. I guess in the news about the most popular cryptocurrency a.k.a. bitcoin. Because blockchain, originally block chain, is the disruptive technology behind digital currencies. But do you know what is blockchain? Here’s blockchain explained, just for you.

What is blockchain technology?

According to Wikipedia, a blockchain is a continuously growing list of records, called blocks, which are linked and secured using cryptography. […] For use as a distributed ledger a blockchain is typically managed by a peer-to-peer network collectively adhering to a protocol for validating new blocks. Once recorded, the data in any given block cannot be altered retroactively without the alteration of all subsequent blocks and a collusion of the network majority. 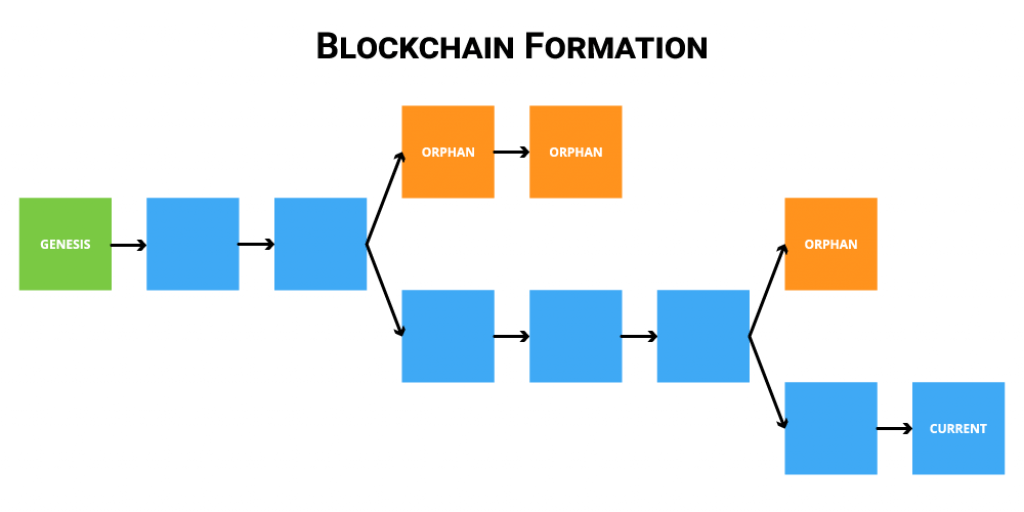 Sometimes I find their definitions a bit complicated. But I think that this one is right on point. Indeed,we’re talking about a database of financial transactions that is:

The person (or group of person for all we know) behind block chain is Satoshi Nakamoto. While he/she/they defined the concept in 2008, he/she/they implemented it as a feature of bitcoin the year after. And many alternative cryptocurrencies have their own block chain.

While Nakamoto implemented it as the ledger of bitcoin, you can find the technology in many different domains. Indeed, blockchain technology has the potential to transform the way we do business in the long term.

What is a block in block chain?

Blocks are at the core of this technology. Indeed, they’re the fixed structure where it stores all the data. And the important parts of the blocks are:

Given the current block, you can access all the previous blocks linked together in the chain. So the database retain the complete history since the origin block.

What is a node in blockchain?

Now that you know what a block is, let’s see where you can find these blocks. As I said above, they’re on all the nodes of the network. So what’s a node? It’s a computer of the blockchain network that verifies and relays transactions.

And most nodes don’t do it for free. Indeed, there’s a reward (like bitcoins) for the node solving the cryptographic problem of a block. So the nodes are actually competing to get the rewards!

How does blockchain technology work?

The best and simplest explanation I found is from William Mougayar, the author of The Business Blockchain (Wiley, 2016). Indeed, he uses the analogy of shared documents when collaborating at work:

Microsoft Word is following the classical way of collaborating. Because only one person at the time can work on a single document. So if a colleague is working on it, you have to wait until he saves it to make further changes.

While Google Docs is implementing the principles similar to the block chain technology. Both you and your colleague have access to the document at the same time. And you can work on it together, the changes you make sync on a single version.

It’s an oversimplified explanation, of course. But I think it’s quite powerful to know how blockchain works. And I’m sure you can get it now.

The advantages of block chain

By design, this technology has a built-in robustness. Indeed, not one single entity can control a block chain. Because the database is identical across its network. Also, there’s no single point of failure. Should a node disappear, the process would keep on going unaffected.

Furthermore, all the participants can access the complete history of transactions. There’s a total transparency. Therefore anyone can verify and audit the block chain data.

Finally, the more nodes in the network, the harder it becomes to overcome the verification activities of the majority. So the network keeps getting more secure with time.

Midas is the founder of Coin Airdrops, one of the main ranking sites for crypto airdrops. He graduated with a master's degree from a top business school. After ten years of experience in marketing and sales, he fell down the bitcoin rabbit hole in 2017. And he's now convinced cryptos are here to stay and to change the world. In addition to launching this blog promoting blockchain projects that give-away digital assets, he's proud to have built his bitcoin node himself, and to self-custody. For privacy and security reasons, he decided to remain pseudonymous here and on Crypto Twitter, where you can catch him.

FreeBitco.in: Why It’s My #1 Faucet

Is cointiply.com Legit? My Unbiased Review

Can You Earn Crypto With RollerCoin? My Review